There’s a line in Fight Club about how on a long enough timeline the survival rate for everyone reaches zero.  Edward Norton might be talking about men hitting each other in dank basements and using soap to blow up buildings, but it’s a rule that also holds pretty true for travellers in India; if by survival you mean not getting sick.  Sooner or later you will eat something that doesn’t like you, or you will swallow the wrong bit of water when you are brushing your teeth, or the mosquito bite or the scratch on your foot that you didn’t bother to use antiseptic on will get infected.  One way or the other, your days of health are numbered.

For my friend Jess, it happened on the way back from the waterfalls.

Located some distance up-river from the ferry crossing to Hampi Bazaar, we’d heard about this place, but no one I spoke to had been there themselves.  Some people said waterfalls, others said rockpools, even whirlpools.  Everything was second-hand and sketchy.  Someone said it was dry this time of year and the water-levels were too low. Elsewhere I heard that the falls were there, just further upstream and harder to find.  There was no map; just a cryptic entry in the guidebook.  We had a strong team for this expedition.  Sigrid and I, Mike and Eve the physiotherapists, Eve’s mate Jack the tattoo artist, and Jack’s school-friend Jess.  We also had Josh and Martin with us; two English climbers with an unerring instinct for tough terrain.  Being seven eighths British, we were short on language skills but well supplied with banter, 90s comedy references and all round joie de vivre (yes, I know that’s French).  We made the river crossing in good form and set off along the dirt track that would lead us away from the familiar world of ruins and coconut stands, and into the wild unknowns of the Karnatakan wilderness.

It was hot.  I know I say that in every post, but it’s only the truth.  It was baking hot, and once we emerged from the path through the banana plantations and into the exposed hinterland through which the river flowed, this punishing fact of life began to take its toll.  When you’re in good health, dehydration, sunburn and sunstroke can do a number on you quite easily, but when you are sickening for something the process is much quicker.  Anyway, we were still fine at this point.  A local man appeared out of nowhere and started walking at the head of our little column.  We weren’t sure what he was up to until he started pointing at things and telling us what they were, helpfully identifying bananas, coconuts, likely photo opportunities and, of course, the path we were already following.  Perfectly capable of finding the way without assistance, I was indignant and made it clear that I had no intention of paying this interloper, though eventually his persistence won out and I did end up coughing up some cash.

Josh and Martin solved the problem by just pushing on ahead on their own.  Caught up in a frenzy of path-finding, they disappeared from view quite quickly once we reached the badlands of water-eroded boulders which had to be traversed in order to reach the river.  Much of this was a scramble; crawling, climbing, and jumping across crevasses deep enough to be dangerous.

Jess is scared of heights.  A lot of people say they have one phobia or other, but it usually just sounds like they dislike something or they find it creepy.  It’s not often you find someone with a proper terror of something.  The thing that makes it different is that it’s not about thoughts.  It is not a matter of thinking ‘oh no, look at that long drop, I could fall off there and die – how scary’.  It is a complete rebellion of instinct (and its bodily allies in the sympathetic nervous system) against the conscious mind.  I have a funny thing with water.  That is to say as soon as I am in it, I start to panic.  It’s not the same thing as fear.  I don’t fear water.  I love the sea, and rivers and lakes, and I would really like to be able to swim well.  But in reality as soon as my body breaks the surface, my breath shortens, my muscles tense up and it’s hard not to just sink.  Even if my face gets wet in the shower (which can happen), I can’t open my eyes until I have wiped away all traces of water.  I don’t give it a lot of thought in the day to day; but it’s definitely a thing.

Anyway, Jess has a phobia of heights, and it wasn’t long before the passage through the rocks was getting to her.  She started well, but then by the time it really kicked in we must have been halfway, and going back seemed as bad as continuing.  Through a team effort of reassuring chatter, hand-holding, time-taking and the occasional human-bridge, we worked our way through that treacherous maze of rocks and crevasses.  I’m not sure how Jess managed it all that way, but she did, and we figured there would be an easier way out on the other side.  For now though, we seemed to have reached our destination.

Not a waterfall in sight, and thankfully not a whirlpool neither.  What there was, was a large rocky pool about 30 metres across at its widest point, surrounded by a smoothly undulating wall of lunar rock.  It was pretty stunning.   Everyone got in.  Some climbed, some jumped.  Josh and Martin were already here, swimming across to a cave on the other side.  Beautiful as it was, I was not keen about going for a swim in this pool of uncertain depth and who knows what lurking dangers.  I had done plenty of frolicking in the waves in Goa, but always where I could but my feet on the seabed and stand up.  This was different.  I’m not sure what exactly changed my mind –  How hot it was sitting there, or the how much everyone else was enjoying the water, or possibly Jess’s example in battling though her terrors and getting to this point.  Anyway, after a couple of minutes of vacilation I got into my swimming shorts, clambered down the rocks and gingerly lowered myself into the cold river.  I figured out a few years ago that the best way for me to be in the water is on my back.  With my ears below the surface but my face in the open air I can let myself relax enough to float.  It’s not swimming, exactly, but it’s a lot better than drowning.  I pushed off the side and quietly kicked my way across to the far side of the pool and back.  It was only a few minutes, but it felt like I’d scored some kind of victory against my phobia, and that was enough for me. 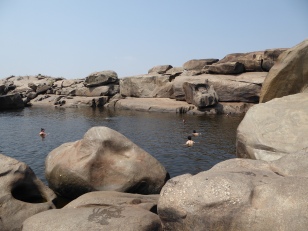 The way back was tough for Jess.  Josh and Martin’s scouting had revealed no easier way out that the route that had brought us in, so she had to do it all again, in reverse.  I talked her through the tricky bits and she made it through, but she was clearly worse for wear. Coming out of the rocks, Josh and Martin decided they wanted to try an alternative route back to Hampi Island, by crossing the river upstream of the ferry.  The rest of us began to head back towards the banana plantations.  It was at that moment that Jess, weakened already by heat and stress, began to vomit.

It took us a while to get there but we were lucky enough to find a rickshaw at the end of the track which could take the six of us back to the ferry.  There wasn’t really room inside, so Mike stood on the rear bumper and clung on like a long-limbed Welsh monkey, while I sat up front with the driver and tried not to get bounced out when we hit potholes.  We crossed the river and made it back to the Goan Corner, where Jess went straight to bed and stayed there for the next couple of days, being all kinds of ill.

Sitting around having dinner that night, we were talking about Delhi Belly and the myriad bacterial illnesses which lie in wait for foreign travellers in India.  It occurred to me that I had made it nearly six weeks in this country without having so much as a single loose movement, and having thought this, I immediately made the mistake of saying it out loud.  “I’ve done pretty well. I’ve not been sick since I got to India” is what I think I said.  Such foolish complacency.  I woke in the morning to an insistent growling in my gut and sharp cramping pains, and for the next week or so I was fighting a running battle with bacteria, marked by frequent visits to the loo, friendly chatter about the consistency of my stools, and a depressingly boring diet of rice, curd and bananas.  I don’t know what got me.  A bit of re-heated rice maybe, or some unwashed hands in the kitchen.  It’s possible my brave attempt at swimming had exposed me to something in the river water.  It doesn’t really matter.  It was pretty much inevitable from the moment I disembarked in Delhi.  I’m just surprised it took so long to happen.